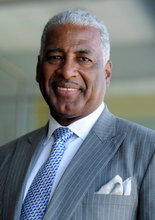 Summary:
Mayor William Bell of Birmingham, Alabama is leading the charge for America’s Civil Rights City to become a global model for human rights, criminal justice and inclusivity. Mayor Bell will speak to Birmingham’s efforts in this regard and how other communities and citizens alike can work together to advance education and policy for equal rights and civic cooperation.

Birmingham’s efforts are transforming its history of civil rights turmoil into a positive force for future education and growth: This March, U.S. Rep. Terri Sewell and Birmingham Mayor William Bell introduced a bill to designate Birmingham’s Civil Rights District as a National Park. Last year, Birmingham was selected by the U.S. Justice Department as one of just 6 pilot cities for the three-year, $4.7 million National Initiative for Building Community Trust and Justice, which aims to build a better understanding of underlying tensions between law enforcement and minority communities.

Speaker bio:
Dedicated to public service, and a member of the Rotary Club of Birmingham, Mayor Bell has served the City of Birmingham for many years. After spending twenty- five years serving Birmingham as City Councilor, Council President, and Interim Mayor, Mayor Bell was elected Mayor in 2011. Mayor Bell is a past President of the African American Mayors Association, has represented the U.S. at the United Nations Committee on Human Rights, serves on the advisory board for the United States Conference of Mayors,’ and has been strongly involved with President Obama’s “My Brother’s Keeper” Initiative. As a respected expert and leader on civil rights, Mayor Bell has travelled around the world speaking about the importance of human rights. You can read more about Mayor Bell’s background and his impressive accomplishments here.