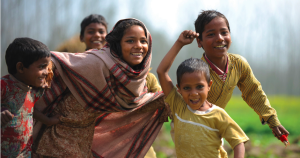 Please read this article from The Rotarian Magazine:

As photojournalist Allison Kwesell walks through the narrow streets of an Indian village, familiarity sets in. She visited here four years ago, when she first met Samir and his family. He was two years old then and had recently contracted polio.

Kwesell approaches the front porch of a home when she hears an older woman yelling, “Samir! Samir!” She runs toward the voice, wondering if she’ll recognize the boy. She sees six children playing chase on the dry earth, the dirt forming clouds around their feet. From afar she notices a young boy, not unlike the other barefoot children in the backyard overlooking patches of farmland, except for his slight limp. She moves closer and the children pause, half encircled around the boy. Kwesell recognizes him by his eyes. Samir is six years old now, and with the help of physical therapy, he can run and play with the rest of the kids in his village on the outskirts of Moradabad.

Samir is one of the last children in India to contract polio. In March, the World Health Organization announced that its Southeast Asia region is officially polio-free. The certification came on the heels of India’s successful fight against the disease: It celebrated three years without polio in January.

The nation’s achievement is the result of a grueling 36-year battle that sent millions of health workers down alleys, up mountains, and across deserts to reach every child in this sprawling country. Not long ago, India had more cases of polio than any other nation in the world. This milestone in Southeast Asia means that 80 percent of the population worldwide lives without fear of the paralyzing disease.