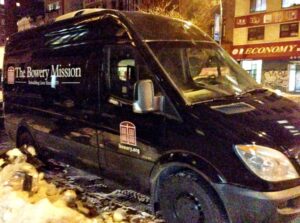 The Rotary Club of Wall Street in early 2014 has procured a Mercedes Benz Sprinter van for The Bowery Mission. The project formed part of the club’s extended assistance to deal with the impact and effects of Superstorm Sandy, and is part of our focus to serve the homeless and low income population in the Lower East Side and across NYC.

Founded in 1879, The Bowery Mission is one of New York’s oldest not-for-profit charity to help alleviate the plight of the city’s homeless, the hungry, the poor, and children at risk. In the aftermath of Sandy, the Bowery Mission experienced a significant increase in the number of emergency shelter intakes, and also provided much needed on-the-ground emergency food supplies, meals, clothes, etc., all of which stretched the mission’s existing fleet of vehicles.

The new dual-purpose van is being used for both passenger and goods transportation and is of great assistance for the charity’s outreach to the homeless population beyond it’s landmark mission location on the Bowery.

As part of our ongoing partnership with The Bowery Mission, we have commenced a monthly meal service project during which members and friends of our club serve meals at the homeless shelter.