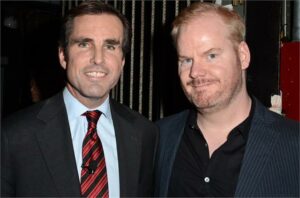 To our friends and supporters, exciting news, download Jim Gaffigan’s “Mr. Universe” and $1 from each sale will be donated to BWF.
NEW YORK, N.Y. – Comedian Jim Gaffigan isn’t hoping a few laughs will help returning war veterans, he’s banking on it.
His new 75-minute stand-up special, “Mr. Universe,” is available through a $5 download on his website, and Gaffigan is donating $1 from each sale to the Bob Woodruff Foundation, which has supported more than 1 million veterans, service members and their families since 2008.
Woodruff was nearly killed by a roadside bomb in 2006 while covering the war in Iraq for ABC News. His foundation supports war veterans who are returning to civilian life.

“He’s been very deeply moved by what needs to be done to further this mission of ours and our foundation,” Woodruff said of Gaffigan during a phone interview before leaving on assignment for ABC News in North Korea.
“We ask these men and women to serve and protect our country and then they come back and are sometimes forgotten,” said Gaffigan, who met Woodruff last year when he performed at the foundation’s Stand Up for Heroes event in New York.
According to Woodruff, advances in technology have limited physical injuries and death when compared with previous wars, but he added: “A huge number, as compared to previous wars, have been injured by invisible wounds. So that’s the one that’s still to a large degree is not really well understood.”
Woodruff, who suffers from a traumatic brain injury, counts himself among the latter group. He suffered head and brain injuries and spent 36 days in a medically induced coma, but returned to the job 13 months later.
“It was a hell of a lot of fun,” Woodruff joked. Later he added: “When it first happens, you wake up just happy to be alive … but over time you worry and get depressed.”
As for starting the foundation, Woodruff says he wanted to help military members and their families because they fall through the cracks.
“Because these wars are voluntary, very few people know people in the military world, so when these families do come back there’s not a lot of interaction in the community,” he said. “We are supporting that gap by what’s being done by the government and what’s not being done at all.”
In the midst of all of the exciting buzz surrounding Jim Gaffigan’s “Mr. Universe” release, the Bob Woodruff Foundation would like to thank Jim for his recognition and support of injured service members and their families. Download the special by clicking this link and laugh for a good cause.