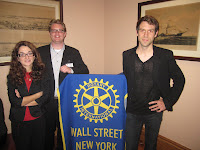 Ambassadorial Scholarships, The Rotary Foundation’s oldest and best-known program, was founded in 1947. Since then, nearly 38,000 men and women from about 100 nations have studied abroad under its auspices. Today it is the world’s largest privately funded international scholarships program. Nearly 800 scholarships were awarded for study last year. Through grants totaling approximately US$500 million, recipients from about 70 countries studied in more than 70 nations.